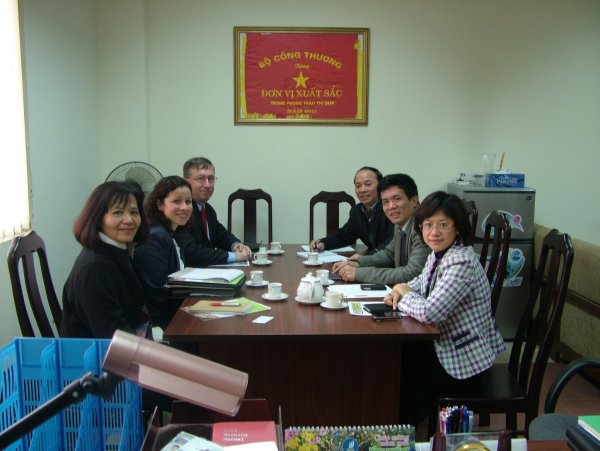 Successful negotiating in Vietnam often depends on the ability of both sides to establish a solid relationship based on trust and mutual commitment.

Successful negotiating in Vietnam often depends on the ability of both sides to establish a solid relationship based on trust and mutual commitment. Networking is key to doing business in the country, and it is advisable to make and keep as many contacts as you can. Your first business trip to Vietnam should have the sole goal of meeting people in the requisite field or industry.

Keep in mind that the Vietnam market is still emerging and is in a constant state of flux. Although markets are open to foreigners, Vietnam is a Communist state and you will have to go through a great deal of red tape in order to conduct business there. There is a considerable amount of opportunity in Vietnam, and business people are usually eager to close deals with foreign investors. Do tread cautiously, though; there is very little in the way of commercial law, and your investment may be difficult to secure. It is always a good idea to confer with a businessperson who is experienced at doing business in Vietnam before initiating a business deal there.

The business relationship is an integral part of doing business in Vietnam. Your counterparts will value trust and commitment over a signed contract; it is important to take the time to cultivate a solid relationship. Your counterparts will devote the first part of every meeting to socializing; take part, and show that you are open and willing to get to know them. Let them know that you are interested in working together for the long term.

The relationship is especially important in Vietnam because contracts are often unreliable. Commercial law is still developing and is influenced by a number of international legal systems; this can sometimes cause confusion. Laws often change and may sometimes apply to a contract retroactively. It is also difficult to enforce a contract through the legal system, which tends to favor Vietnamese over foreign businesspeople. Overall, the surest way to secure your counterparts’ commitment is to invest in a stable relationship.

Your counterparts will probably take a win/win attitude toward negotiating, though they will probably try to gain slightly better terms for their own side. In order to maintain a positive relationship, it is important to contribute to the cooperative atmosphere. Reiterate your commitment to your counterparts throughout negotiations, and focus repeatedly on the mutual benefits to both sides.

Your counterparts may be fierce negotiators; it is important to stay calm and maintain a friendly demeanor even if they seem to be making excessive demands. Keep in mind that many Vietnamese businesspeople are eager to do business with foreign investors. Without shattering the win/win atmosphere, you may want to remind your counterparts that you can take your business elsewhere, should you find their demands to be unreasonable. Make it clear that you will only invest in a project that is likely to show returns within a reasonable amount of time.

Vietnamese businesspeople expect their counterparts to behave with courtesy. Speak softly and politely at all times, and offer additional courtesy and respect to senior counterparts. Showing anger or speaking louder than is necessary will be seen as a lack of self-control. It can deter your counterparts and may put the business deal at risk. Pay attention to posture: don’t slouch or put your hands in your pockets.

Your manners can significantly impact the way that your counterparts perceive you. First impressions are important; pay extra attention to the way that you conduct yourself early on in the relationship. A Vietnamese businessperson may reject your proposal if he or she is unimpressed with your mode of conduct.

The concept of face can interfere with direct communication. Vietnamese tend to communicate indirectly when they have a negative message to impart. They may avoid rejecting your proposal, or a particular idea, outright. Instead, they will avoid the subject or speak in vague terms. Smiles are often used to mask discomfort. Similarly, do not assume that your counterparts agree or understand you when they nod—they may just be trying to be polite.

If negotiations take a turn for the worse, your counterparts may place the blame on their interpreter, claiming that there was significant miscommunication over a particular issue. Bringing your own interpreter to meetings can ensure that they won’t try this tactic.

Expect negotiations to take a long time. There is often a good deal of bureaucracy and you may have to make the same presentation to numerous people within a company. Be as patient as you can, but be aware that your counterparts may delay negotiations for longer than necessary in the hopes that you will agree to more concessions in order to help move things along. Clarify early on that you are meeting with a number of companies and will be visiting more than one city while you are in the country. Let your counterparts know that if business cannot be concluded within a reasonable amount of time, you will take your business elsewhere. The specter of competition will probably get your counterparts moving faster.

Your counterparts may also drag out individual sessions in order to tire you out. After a few hours in a cigarette-smoke-filled room, drinking tea, and haggling over small details, they hope that you will make concessions just for the sake of ending the meeting. If you feel that you have had enough for the day, politely ask for an adjournment and schedule a follow-up session. Try to leave disputed points open-ended rather than end on a negative note. Be as courteous as you can when taking your leave.

Don’t expect your counterparts to meet deadlines on time. Although they will respect your schedule to the greatest extent possible, Vietnamese businesspeople are still adapting to the pace of the global market. Bureaucracy and limited infrastructure may cause delays that are out of their control. It is best to stay patient and flexible; plan for possible delays at the outset so they will not set you back significantly. Respond with understanding rather than anger. Your counterparts are more likely to come through because of a cordial relationship than a contractual commitment.

Vietnamese value calm, understated behavior, and tend not to show their emotions openly. Be sure to conduct yourself in a similar manner. Stay in control and behave courteously no matter what. Avoid confrontation at all costs, and never criticize your counterparts in public. Causing someone to lose face could be detrimental to negotiations.

Your counterparts may use emotional tactics. This can include attempts to make you feel guilty, grimaces at an offer, or demands for concessions on the basis of your relationship. Be flexible and willing to compromise, but hold your ground if their demands are excessive. If you agree to a concession, ask for one in return.

Vietnamese businesspeople are often willing to take calculated risks. However, they will usually do so only after they are satisfied that they understand the deal to the greatest extent possible. They will spend a considerable amount of time gathering information and deliberating, so expect decision making to take a long time. It is best to be patient while you wait for a decision. Pressuring your counterparts is unadvised. It could insult them, and may cause even more delays.

Your counterparts will probably take personal feelings and experiences into account as well as general principles when making a decision. Keep in mind that maintaining a good rapport is especially important at this stage of negotiations. Be flexible and patient, and offer as much information as you can to help your counterparts feel comfortable. Outlining additional sources of support and reiterating contingency plans can help them decide in favor of a risky proposal.

Companies and government agencies are structured hierarchically. It may take some time before you are able to meet with top executives or officials. Executives often leave relationship building to junior employees and will only meet with you once you have established a rapport with the company and they are interested in your proposal. When dealing with government agencies, expect to meet first with mid-level clerks who have the ability to grant or refuse access to higher-level officials. In both cases, take the time to establish a positive relationship with your junior counterparts. Though they may have less of an impact on final decisions, they can exert their control over whom you are allowed to meet.

Always treat senior counterparts with respect and deference, as they will have the final say regarding your proposal. If you have trouble identifying the senior members of your counterparts’ team, your interpreter should be able to help you.

Negotiations will almost always begin with agreements about the general aspects of the business deal. After both sides agree to the general terms, your counterparts will begin to negotiate over the specifics. Don’t let your guard down, even after you agree on the generalities. The Vietnamese will negotiate fiercely over each and every detail, and the bargaining process can be long and intense once you get down to specifics.

Your counterparts will want to examine each detail and will probably press for concessions each time. Never start with your best offer; assume that your counterparts will ask you to do better, so leave some room to accommodate them. Although they will expect you to compromise as a show of good will and flexibility, don’t agree to a concession until you have discussed it thoroughly. When you do concede, ask your counterparts to do so in return.

Your counterparts may be more than happy to specify only general terms in a contract. They may be eager to leave details vague if this works in their favor. Insist on a detailed contract and do not sign unless every aspect of the deal is spelled out and clearly indicates the obligations on each side.

Keep in mind that you are doing business in a country with a limited system of commercial law. It is difficult to get a court to uphold a contract, and an ambiguous contract may prove impossible to enforce. Be sure to review the agreement with a competent lawyer before your sign. Foreign lawyers are forbidden to practice in Vietnam, but some have offices in the major cities, where they provide advisory services to foreign businesspeople. Contracts are legal only if they are written in Vietnamese, so make sure to review the contract carefully with a translator whom you trust, and sign only if you are sure that you fully understand the terms.

The assessments detailed in this article are intended for informational purposes only. They reflect typical attitudes within a given country or culture, and are not intended to describe any specific individual or business. World Trade Press is not responsible for any action taken on the basis of the information contained herein.

World Trade Press would like to acknowledge the research of Jeswald W. Salacuse (“Ten Ways That Culture Affects Negotiating Style: Some Survey Results,” Negotiation Journal, July 1998, Plenum Publishing Corporation) as the basis, with modifications, for the assessment categories described in this article.